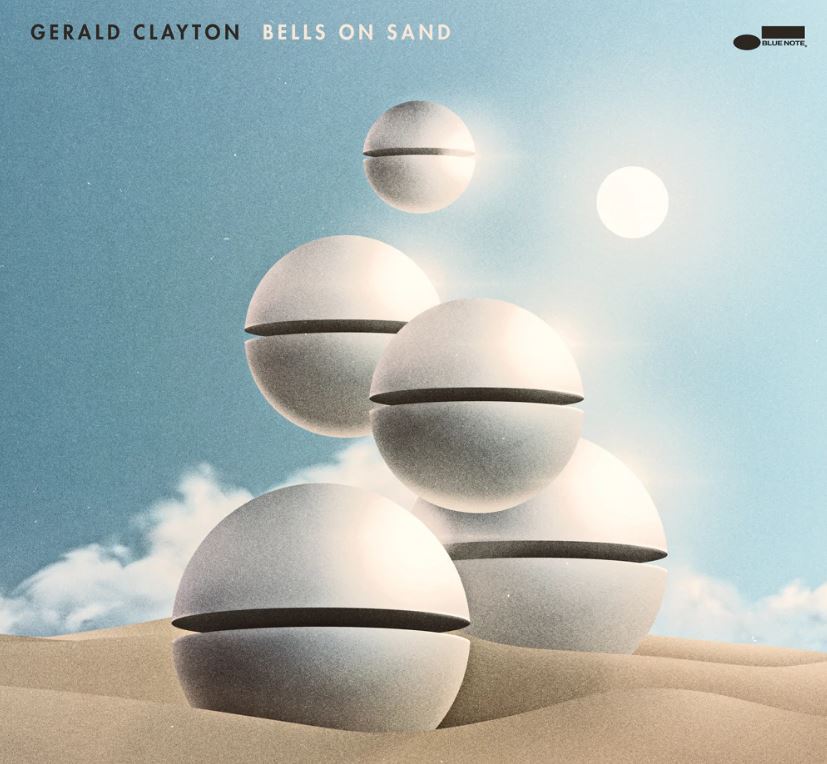 Jazz pianist Gerald Clayton might casually call Bells on Sand “my pandemic record,” but it’s hard to quantify what that meant for his creative process. “If one of the challenges of writing music pre-pandemic is that you’re busy going from one thing to the next, that wasn’t relevant during the pandemic because I had nowhere to go,” he tells Apple Music. “But music is always a bit like—somebody described it in an interesting way: It’s like trying to gather fog. You do your best to put a blanket around it and collect as much as you can, but some of it sort of slips away. And maybe you open up your blanket and it flies away from you immediately, or you’ve got some of it. All of that is to cryptically say that, in some ways, it doesn’t matter what the circumstances are surrounding the process of making art—it’s always going to have a certain kind of mystery and you’re facing the same blank canvas every time.”

The solitude of the pandemic, though, led Clayton to numerous wells of inspiration. In addition to the songs he’d write specifically for the project, Bells on Sand features the work of Catalan composer Federico Mompou, two versions of the jazz standard “My Ideal,” and a song written by the pianist’s dearly departed uncle Jeff Clayton. He also collaborates with sax great Charles Lloyd and Portuguese vocalist Maro, in addition to featuring drum and bass work from friend and longtime musical accomplice Justin Brown and Clayton’s father John, respectively. “Part of the significance of this record is the musicians I chose for it and my relationship with them,” Clayton says. “It just comes down to me loving their musical expressions, their sound, and thinking that they would do wonderfully to play this music. Afterwards, you start to think about how special it is, and that it’s something to cherish that I get to do that with my father and Justin, but first things first—they’re just good musicians that I wanted to play on the record.” Below, Clayton tells us, track by track, how Bells on Sand all came together.

“If you have a pile of tunes, sequencing them is a process of looking at all of them at the same time and deciding what order of events you want, where you start the journey. Being that Bells on Sand is more of an intimate record, I think ‘Water’s Edge’ has a nice balance of intimacy, but there’s also a dynamic range and it gets a little bigger, a little more filled-out with other instruments. We’re not starting on a solo piano track; we’re starting with a little bit more. So, it feels like a good opening in sequence with the rest of the material, setting the vibe of the record and the general atmosphere, the ecosystem that this record lives in.”

“I was introduced to [the work of Federico Mompou] by a dear friend 10 to 12 years ago, when I was living in New York. And just like when you hear anything that you love for the first time, a light bulb sort of goes off. It really just grabbed me. And I leeched the printed music, actually spending some time with it at the piano, and tried to get some understanding of some of the science behind it as well. It’s just a very organic relationship of hearing something that you love and feeling a desire, a sort of a calling and a pull to get your hands on it somehow, to understand it more, just to soak it up more, to experience it more.”

“I think I got hip to Maro on social media and just seeing all the great work she’s done with other artists. I know she was working with Jacob Collier for some time. And then checking out her work and just falling in love with the sound—her expression just really resonates with me. And she recorded something of mine and sent it to me, and I was really moved and touched. And it all sort of came together pretty naturally and pretty quickly.”

“I love just playing tunes, first of all. [‘My Ideal’] is a song I just really love and have been playing and ruminating on and thinking about and just dealing with for the past few years. As far as having two takes of it, I think it fits well with the theme of this record, the notion that we sing a song one day and come back to the same place the next day, sing the same song, and it takes on a completely different meaning—that the sands underneath us have shifted, that everything we do is on a temporal landscape, that there’s a sort of magical abstraction when you think of things on the axis of time. It felt relevant to have two versions of the same tune that actually live in different emotions, different feelings, different sounds.”

“At the beginning of 2021, I sort of gave myself the pandemic goal of trying to just put pen to paper every day. This was one of the things that came out of that. But as soon as I wrote it, it became pretty clear that it was me channeling my influence of Roy Hargrove—I was really blessed and fortunate to play with him for three years in his band and tour with him and record with him and just get to know him as a person. So, it just feels right for me to pay some respects, some homage, because he really was just so special. I flirted with the idea of adding more to it, come up with a melody, throw all the bells and whistles on it, but I kind of like that it doesn’t have that, that it really just sits a little bit more openly. And you can kind of just imagine Roy on top of it.”

“I think in a very stripped down, tangible, practical way, [‘Rip’] is really just a theme that develops. It doesn’t do something brand new and different. It’s really a development of a single idea. As far as the way that the song makes me feel, what influenced the title has a little bit more to do with this feeling of moving water, like a rip current—that you’re maybe finding yourself not so much in control but being pulled by the water and going in circles.”

“I had been thinking about Maro when I was writing this piece—she was on my mind a lot, especially when I was writing music that, I felt, lent itself to a lyric. This is actually the one that I really want to say the least about because there are lyrics, because it is what it is. I imagine people have questions for what the meaning is to me, how literal, but I’d rather just not even answer them.”

“I first was moved by [Charles Lloyd’s] music in ’07 or ’08. I saw a concert at the Umbria Jazz Festival—it was his band with Eric Harland and Jason Moran and Reuben Rogers. And it brought me to tears. And that was one of those moments where you make a note to yourself: I want to play with Charles Lloyd. I saw him more and more from that point on, and around 2013, Jason Moran was getting ready to start other projects and maybe didn’t have time to be full-time with Lloyd anymore, and I got the call to do an audition gig, essentially. So, I played a gig at the Dakota in Minneapolis with him a couple nights, and since then I’ve been really fortunate to play with him in various contexts and different records. So, I just feel really honored that he came and blessed the project.”

“There Is Music Where You’re Going My Friends”

“We lost my uncle [Jeff Clayton] a year and a half ago to cancer. I had spent a lot of time with him playing with The Clayton Brothers for years. And growing up, hearing his sound had a tremendous impact and influence in my life, both musically and otherwise. So, this was my chance to pay tribute to him. At the beginning of the track, he’s giving a bit of a sermon that leads into this message that when you die, you go to a big, beautiful jazz club in the sky, and all the greats are there, jamming until the end of eternity. So, as he was transitioning, that was a piece that obviously felt relevant, and it’s something I even played for him—the last thing I did, actually, was play this song for him.”