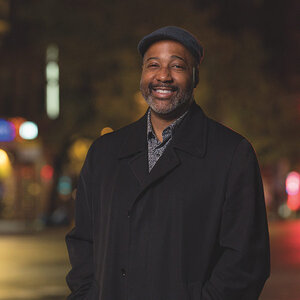 The series continues on April 12 with another special duo performance featuring pianist Eric Reed and bassist John Clayton. Through more than a quarter-century as a first-call artist on the jazz scene, Reed has articulated this inclusive conception as a leader of numerous ensembles, solo performer, composer, producer, educator, and sideman with numerous artists, including extended stints with Joe Henderson, Freddie Hubbard, Buster Williams, and Wynton Marsalis. A master interpreter of the music of Thelonious Monk as well as the jazz standards, Eric is also an accomplished composer of originals and maintains a strong connection to his roots in gospel music. Whatever the context, whatever the style, he consistently animates the flow with fresh ideas, virtuosic chops, intellectual clarity, and an unwavering will to groove. He is joined for this date by the celebrated jazz educator, bandleader, producer, and arranger John Clayton, widely acclaimed as one of the leading bassists in jazz. With a Grammy on his shelf and eight additional nominations, artists such as Diana Krall, Paul McCartney, Regina Carter, Dee Dee Bridgewater, Gladys Knight, Queen Latifah, and Charles Aznavour vie for a spot on his crowded calendar. Clayton’s past appearances on the Athenaeum series include concerts with pianists Benny Green and Mike Wofford as well as the Clayton Brothers Quintet.