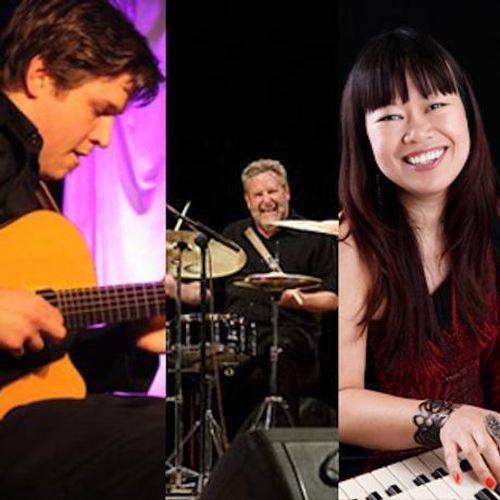 On Sunday, October 29 at 7:00 pm, the Nashville Jazz Workshop will present a very special performance by world-class drummer Jeff Hamilton with organist Akiko Tsuruga and guitarist Graham Dechter. The Nashville appearance is one of several stops the group is making in the Southern U.S., creating a one-time opportunity for Nashville fans to see these virtuoso musicians in concert.

Drummer Jeff Hamilton needs no introduction to Nashville jazz audiences. He has appeared in the Jazz Cave on a number of occasions with his trio (Tamir Hendelman and Kristof Luty) and has drawn standing-room crowds each time. Early in his career Jeff attracted critical acclaim for his work with Oscar Peterson and Ray Brown. He has gone on to become a mainstay of the Clayton-Hamilton Jazz Orchestra as well as his working trio. hamiltonjazz.com

A popular and innovative mainstay on the New York jazz scene, Hammond B-3 virtuoso Akiko Tsuruga has been praised as one of the most dynamic performers in music. Drawing influence from jazz greats including Grady Tate and Dr. Lonnie Smith, Tsuruga’s performances have delighted audiences at prominent New York venues including Dizzy’s Club Coca Cola/Jazz at Lincoln Center, Birdland, Blue Note and Smoke Jazz & Supper Club.

A native of Osaka, Japan, Tsuruga started playing the organ at the age of three and later graduated from Osaka College of Music. She began making her mark in the music industry in her homeland and soon became a noted jazz composer, organist and pianist. Moving to New York City in 2001, Tsuruga has released seven albums and performed extensively both as the leader of her own trio and as a side musician for artists including Grady Tate’s vocal group and the Lou Donaldson Quartet. akikojazz.com

An accomplished guitarist, composer and arranger, Graham Dechter plays with the kind of swinging authority and seasoned maturity that belies his young age. The 28-year-old Los Angeles native, a member of the Clayton-Hamilton Jazz Orchestra since he was 19, shows a deep reverence for the jazz guitar tradition in his warm-toned renditions of ballads, bossas, bebop and blues. A formidable soloist and consummate accompanist, he imbues standards with rare enthusiasm and an inherent bluesiness while carving out his own path with several affecting original compositions. grahamdechter.com

Tickets for this special performance will be $50, available online from Brown Paper Tickets beginning Monday, October 16. Tickets will also be available by phone 24/7 at 800-838-3006 or during business hours at the NJW office at 615-242-5299. Patrons are encouraged to reserve early, as the show is expected to sell out quickly.

Back to Events Listing